This Is A Running List of iPhone Tips as I come across them or discover them.

Since iOS10 at least, and on the iPhone 7 series and later, (if not before), you could make your iPhone completely hands free for things like making calls over speaker, setting alarms, reading and making messages. This means setting your iPhone into "always listening" mode. After extensive testing, this has very very very little impact on battery life. Unlike some of the Android phones I've had, where it actually did have a noticeable impact on battery over the course of a day.

Go into "Settings", down to "Siri & Search" and make sure Listen for "Hey Siri" is active. From this point on, you can turn the screen off, put your phone on the table, and without touching the device, trying saying things like:

"Hey Siri, Message to So-N-So, Lets have steak on the barbecue tonight."
Or...
"Hey Siri, Read My Messages" and it will actually prompt you one my one to read your messages, reply, skip, etc. Pretty cool.
You can also expand upon this by saying instead,
"Hey Siri, Read My Notifications" and it will instead include ALL your notifications. This is fantastic if your hands are greasy (eating that steak from the Barbecue), or you are otherwise occupied, perhaps playing your Android phone that requires you to actually touch it.
Or...
"Hey Siri, call So-N-So on Speaker."

I haven't found a good way yet to ANSWER a call hands free except for the Auto Answer function which answers all calls..., but if I do and can verify I'll be sure to post.  I actually haven't tried this Auto Answer function, and while this sounds close to the solution, it does require that except step of remembering to turn it on first, then off.

Turn On / Off Wifi & Bluetooth Quickly, And For Real.

With iOS 11 it's become a bit of a chore to manually turn on and off things like Wifi and Bluetooth he old fashioned way, by using the control center. The quick "control center" options don't really do anything anymore. It doesn't turn off WiFi or Bluetooth in system settings. So I found the quickest way to truly turn on or off WiFi is to simply say, "Hey Siri, Turn Off Wifi". And that actually does turn off the switch in the System Settings.

"Can You Take Me Out Of This Conversation"

One of the more common things I hear, mostly from my mom and sisters, is when a group conversation gets rather active with pings and beeps back and forth, is that someone invariably says, "Hey, can you take me out of this group, I'm trying to sleep/eat/watch a movie/it's just irritating".
In iOS11 you can now simply slide your finger across the thread, and choose "Hide Alerts". This will allow the conversation to continue. In iOS 10 you canclick into the conversation, click on the  (i) on the upper right and choose "Hide Alerts", which is also still active in iOS 11.


Way Too Many Tabs Open In Safari 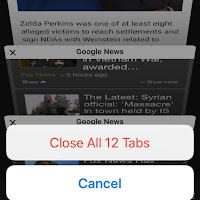 In Safari, it's quite easy to have a bazillion tabs open by mistake. Sure you can close one or two by by first clicking the right most icon on the bottom of the safari screen, then swiping away each open window. But if you many tabs open, this can be tedious. Instead, hold down on that same icon first, and in a moment a menu will pop open. The topmost option will be to close ALL the open tabs in one fell swoop.