Quick Review - Leef iOS MicroSD Reader. If you can deal with the quirks, it's almost like Android 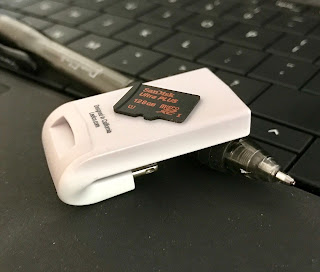 It's about the size of a small USB stick that we used to use on PC's and it fits rather snugly into my iPhone7. The main feature is that it does not have a set amount of storage, but relies instead on you inserting a MicroSD card into it.

The apparent benefits of course seem quite obvious. The shortcomings are not quite as obvious.


Pros:
And the end of the day, that's really all you need it to do. But there are some issues I ran into.
Cons:
Summary:
For $39 it solves a storage issue, and storage alone, on iOS devices. It's great if you think you are headed out for the weekend and want to take many gigabytes of photos and videos and also want to drag along a large music library.

It does NOT solve the issue entirely of lack of internal storage and I was disappointed in how much storage it took up and how it grew and grew quickly. But then all iOS apps seem to do this which is frustrating. But I'm cool with knowing I can simply do a quick reinstall if need be.

I also like that it makes it 1000 times easier to get photos and stuff INTO the phone, not so much out of or storing them on the device. This is arguably the biggest benefit to me. Photos I can upload quickly to Google Photos on the fly and delete. But getting massive amounts of files, or a few large files ONTO the phone, was always an issue I dreaded with iPhones. This is clearly one area with Android that I always missed on iOS. Both devices are easy to get stuff off of them. But trying to copy that 3 gig website you just remembered to copy onto your phone while you rush off to work...

Now with the Leef, getting stuff from my PC onto my iPhone is as easy as it was with my Android devices: Insert SD card into PC, copy, remove and place SD card into phone. It's nice to have that ability now on iOS.

And there is my 2 minute review.